We have experienced a major outage on our servers due to a outage on the main and backup power supplies at our host, but have recovered all services: http://www.theregister.co.uk/2011/08/08/bpos_amazon_power_outages/

Update 08.28pm, 09 AUG 2011 – senior engineers from Amazon AWS are currently assisting on the recovery process. We will provide an update in the next hour.

From Amazon AWS where our servers are hosted:

“We understand at this point that a lighting strike hit a transformer from a utility provider to one of our Availability Zones in Dublin, sparking an explosion and fire. Normally, upon dropping the utility power provided by the transformer, electrical load would be seamlessly picked up by backup generators. The transient electric deviation caused by the explosion was large enough that it propagated to a portion of the phase control system that synchronizes the backup generator plant, disabling some of them. Power sources must be phase-synchronized before they can be brought online to load. Bringing these generators online required manual synchronization. We’ve now restored power to the Availability Zone and are bringing EC2 instances up. We’ll be carefully reviewing the isolation that exists between the control system and other components. The event began at 10:41 AM PDT with instances beginning to recover at 1:47 PM PDT.”

Popular posts from this blog

New 2-Way SMS feature for Base 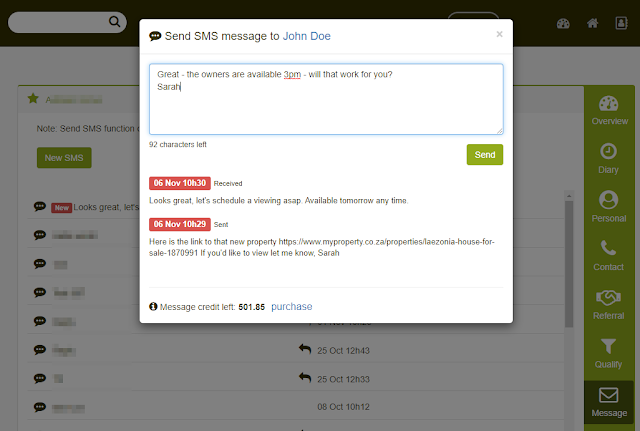 Base users can now send and receive SMS messages to clients with the new 2-way SMS feature.

Simply open a contact and you will see a new MESSAGE tab on the right.
Click on new SMS to create a new message to a client (limited to 160 characters). Be sure to include your name and/or office details to sign off messages:


When a client replies, the message is added to the message thread of the contact. A notification is also sent to your dashboard an inbox (shown below). From here you can open the message to reply should you want to:


To purchase credits for SMS simply click on the purchase link on a new message which will take you to the following screen. When you purchase credits via credit card, it is instantly applied to your account.

You can also go to your profile / integrations and purchase credits there. Administrators have the option to override send/receive SMS functionality for individual users.

We have enabled a 'furnished' field that will pull through to relevant portals that support it, including Property24 and Private Property. This is how you can select it in the various systems:
OMS Your office administrator need to go to settings, parameters. Choose 'Office:Property features list, residential' and add 'Furnished' (case sensitive). Press save.
(If you have multiple fields, separate the with commas, e.g.: furnished,ocean view,mountain view,walking distance to beach,alarm,electric fence,borehole,3-phase power)
You can also contact the Entegral Helpdesk to enable for you

Going into a listing you will notice the Furnished field you can select to show a property is furnished:


Base The field is already in Base under features, just select furnished.


Sync If you make use of your own management system through our Sync API, the new field is available to use (furnished = 1 / 0)
https://sync2.docs.apiary.io/#reference/listings/listing-collection/create-or-upda…
Read more

If you use the OMS, Base or Sync products, and select the property as a new development, we will default to display a 'no transfer duty' banner on your Property24 listings as illustrated below:

Please open and update those listings for the change to take effect on your Property24 listing.
Read more